Happy Wednesday y’all! This week I’m eagerly waiting on Six Crimson Cranes by Elizabeth Lim. I absolutely loved Lim’s Spin the Dawn so I’m that much more excited for this one. Six Crimson Cranes is inspired by the story The Wild Swans and steeped in Asian culture and mythology. I cannot wait to see what Lim does with it! 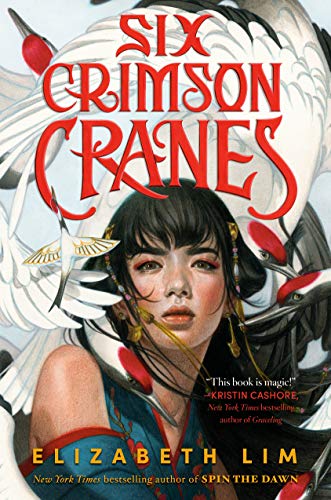 Shiori, the only princess of Kiata, has a secret. Forbidden magic runs through her veins. Normally she conceals it well, but on the morning of her betrothal ceremony, Shiori loses control. At first, her mistake seems like a stroke of luck, forestalling the wedding she never wanted, but it also catches the attention of Raikama, her stepmother.

Raikama has dark magic of her own, and she banishes the young princess, turning her brothers into cranes, and warning Shiori that she must speak of it to no one: for with every word that escapes her lips, one of her brothers will die.

Penniless, voiceless, and alone, Shiori searches for her brothers, and, on her journey, uncovers a conspiracy to overtake the throne—a conspiracy more twisted and deceitful, more cunning and complex, than even Raikama's betrayal. Only Shiori can set the kingdom to rights, but to do so she must place her trust in the very boy she fought so hard not to marry. And she must embrace the magic she's been taught all her life to contain—no matter what it costs her.

Elizabeth Lim grew up on a hearty staple of fairy tales, myths, and songs. Her passion for storytelling began around age 10, when she started writing fanfics for Sailor Moon, Sweet Valley, and Star Wars, and posted them online to discover, "Wow, people actually read my stuff. And that's kinda cool!" But after one of her teachers told her she had "too much voice" in her essays, Elizabeth took a break from creative writing to focus on not flunking English.

Over the years, Elizabeth became a film and video game composer, but she always missed writing. One day, she decided to write and finish a novel -- for kicks, at first, then things became serious -- and she hasn't looked back since.

Elizabeth loves classic film scores, books with a good romance, the color turquoise, overcast skies, English muffins, cycling, and baking. She grew up in Northern California, with a brief stint in Tokyo, Japan, but now lives in New York City with her husband and their daughter.

Release Blitz: The Corner of Forever and Always by Lia Riley