Happy Wednesday y’all! This week I’m eagerly waiting on Love is a Lyric by Michelle MacQueen. I actually have an ARC of this one that I plan to start soon. My favorite romantic trope is celebrity. I can’t really say why, but I tend to gravitate towards those books. This one focuses on an assistant and a rockstar. I cannot wait to dive in! 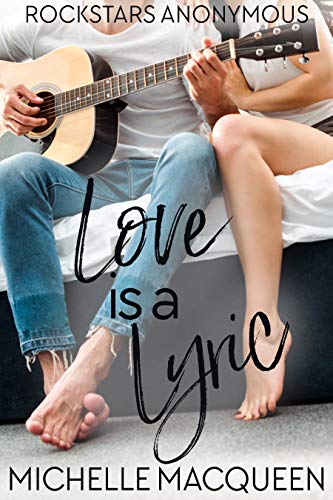 Love is a Lyric by Michelle MacQueen
Series: Rockstars Anonymous #1
Published by Twin Rivers Press on 2021-03-04

Keep your head down.

That’s the number one lesson Piper Hayes has learned as the assistant to her rock star sister. Don’t ruffle any feathers. Quinn always get what she wants.
The perfect boyfriend.
The right media attention.
And the lyrics that seem to pour out of Piper at every opportunity.
But a good assistant does the right thing. She does her job and keeps her mouth shut if she knows what’s good for her.
Yet, when her sister’s actions hurt the best guy Piper has ever known, she must choose between being a good assistant, a good sister, and taking care of the one person who ever made her feel like she could do more.

Keep your chin up.

Rockstars don’t get to complain. Ben Evans is a household name. He has more money than he ever dreamed of and the perfect girlfriend.
It was fate, the way they fit together. The only lyrics Ben had ever been able to craft music to were Quinn’s. The words spoke to him, made him believe in himself and what their band, Fate, was doing.
When his longtime girlfriend betrays him, the only thing he wants is to escape to his hometown where the media’s rumors can’t get to him.
He never expected Piper to follow him, to choose him over her sister.
Now, he must decide if it’s truly the lyrics he loves or the girl who was right in front of him the entire time.

Love is a Lyric is book one in Rockstars Anonymous, featuring one rock star support group, five ridiculous stars, and four swoony romances. Beware of concert crashers, meddling families, and rock stars who can’t seem to stay out of each other’s love lives.

Michelle MacQueen has a brain that won't seem to quiet down, forcing her into many different genres to suit her various sides. Under the name M. Lynn, she writes fantasy along with her Michelle MacQueen romances. Running on Diet Coke and toddler hugs, she sleeps little - not due to overworking or important tasks - but only because she refuses to come back from the worlds in the books she reads. Reading, writing, aunting ... repeat.

Review: The Gift: A Highland Novella by Margaret Mallory

Review: Roman and the Hopeless Romantic by Michelle MacQueen

Review: Jesse and the Ice Princess by Michelle MacQueen

Review: Spencer and the Younger Girl by Michelle MacQueen