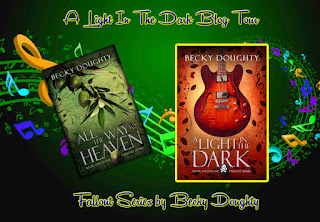 Crimson Tree Publishing is excited to bring you A Light In The Dark, the latest book in the Fallout Series by Becky Doughty.

Tish Ransome was fun to look for, because I already had a clear picture of what I wanted in my mind. An attitude and the talent of Hayley Williams of Paramore, but with the looks of Kaya Scodelario. That pixie look about Kaya – with that black hair, pale skin, and huge eyes, but plays a bad/tough girl so convincingly because of a vulnerability that’s practically etched into her features.

Tom Campbell – I already knew who Tom would be, too. I’d fallen in love with Sam Claflin in The Hunger Games, but I felt like they’d made him almost too pretty to play Tom. Then I saw him in Love Rosie where he played the most brilliant best friend/love interest and from that moment on, I couldn’t picture Tom as anyone else!

Sebastian Jeffries. If you haven’t figured this out, the name is a mix-and-match of Sebastian Stan and Jefferson, the Mad Hatter character in Once Upon a Time, a big favorite of ours. Both the show and the actor. He does the brooding thing so well! But there’s also a bit of Robert Pattinson in his Twilight glory days if you look for it…

Foster and Pete – At first I pictured him a little like Neal Unger (the 60-something skater), but then I stumbled on an article about a homeless man and his dog (Steve Anthony and River) and their picture captured the image of Foster and Pete so well. This is how I see them in my mind. The real life story is pretty cool, too.

Jordan Ransome, the youngest of the four Ransome brothers, has similar coloring to Tish, and although he didn’t strike me as spot on at first, I warmed up to the idea of Richard Madden (think non-Game of Thrones, almost-clean-shaven, and sweet – the way he was in The Promise, or in Cinderella) playing Jordan. This role is important, because Jordan is back in the spotlight in Book 3, A Long Way Home.

Ani Tomlin, Tish’s best friend, was played in the first book by Nora Arnezeder, and her fiance, Paulo Durante, was played by Alexander Koch.

And just for fun, check out this lovely Buzzfeed of dear Alex…

And last, but not least, two other “characters” who played minor, but significant roles… Tish’s Chanticlaire and Sebastian’s Alejandro.

That was fun – thanks for letting me play casting director! ~Becky

On stage, Tish Ransome sings about heartache and passion, betrayal, and about love gone wrong… but she knows very little about any of it in real life. The rockstar princess who swears like a pirate—literally—is loved and adored by family, friends, and fans alike, and her world is filled with good things, her future bright.
Behind the scenes, however, trouble is brewing. When Tom, her best friend and co-founder of the Marauders, tells her he's leaving the band after graduation, Tish must find a new wingman to step into Tom's hard-to-fill shoes. The moment she hears Sebastian Jeffries play, she knows he's the one.

Yet with Sebastian comes a taste of the things Tish only writes about, and she can't resist the lure of the tortured artist. Sebastian, likewise, is drawn to Tish's brilliance, but like a moth that hovers too close to the flames, is he killing himself just to be near her? Can Tish save Sebastian before it's too late, or will he pull her down into the darkness with him?

“Wow,” I exclaimed with a dramatic sigh, pressing a hand to my chest. “A Captain Crunch aficionado. I think I might just be falling a little in love with you, Sebastian Jeffries.”

It was supposed to be a joke. I really thought I could pull it off, too. But I have this problem. I tend to speak before I think things through. And if I’d thought it through, I might have taken into consideration just how true that statement was.

His silence made it worse. I couldn’t look at him.

“Sorry,” I muttered. I crossed my arms again and moved toward the front steps.

I climbed the two steps up before turning around. I hoped the added height would boost my confidence a little, as well as put some space between us.

All it did was elevate me to eye-level with him, and with the porch light behind me, shining on his face, I found myself looking into the strangest shade of blue eyes I’d ever seen. Not blue like periwinkles or the summer sky or crystal blue, all things I’d heard my own eyes compared to, but blue like mottled sea glass, like the still waters of a deep lagoon. Like a love spell cast on a summer night by a magic man.

Get Your Copy Today:

Don’t Miss the 1st Book in the Fallout Series

All the Way to Heaven by Becky Doughty
Series: Fallout,
Published by Crimson Tree Publishing on 2015-11-02
Length: 331 pages

Anica Tomlin, business major, has just learned that the man she's been planning her future around, her Global Finance professor, already has a beautiful wife and family. Ani cashes in her graduation gift to herself a little early a trip to Tuscany but from the moment she boards the wrong train in Pisa, her plans for solitude and self-indulgence begin to unravel around her.

When a bicycle accident thrusts Ani into the skilled hands of the dashing Dr. Cosimo Lazzaro, she reluctantly accepts his invitation to recover in his family's country villa, perched on a hilltop surrounded by the Lazzaro olive groves. But it's been a black year for olive growers all over Italy, and generations of tradition are being put to the test like never before.

Ani is swept up in the drama of life in Tuscany, the convergence of old and new, and the passions that drive people to pursue the desires of their hearts. Just as Ani begins to get her feet under her again, an unexpected turn of events leaves her doubting the very existence of happily-ever-after, unless she can learn to trust the desires of her own heart.

Although "All the Way to Heaven" is a stand-alone novel, it is the first book in The Fallout Series, a collection of sweet contemporary romances that follow characters featured in the first book."

Becky Doughty is the author of the award-winning Elderberry Croft series and the voice behind BraveHeart Audiobooks. “I write fiction, mainly because nonfiction is hard! Yes, I’ve tried. Let’s just say I like to color outside the lines when it comes to sticking to facts…or anything else, for that matter. I write Women’s Fiction with strong elements of romance and Young Adult/New Adult Fiction. Some of my fiction is written from a Christian worldview (and labeled as such), and some of it is not. My stories, however, are all categorically “clean” or “sweet” (light on language, violence, and sex), so if you’re looking for a book you don’t have to shove under the couch cushion when visitors stop by, you’ve come to the right place!”

You can learn more about Becky and her books on her website: www.BeckyDoughty.com

Becky is married to her champion of more than 25 years. They have three children, two of whom are grown and starting families of their own, and they all live within a few miles of each other in Southern California. They share their lives with too many animals, a large vegetable garden, and a strange underground concrete room they’re certain was built for dark and sinister purposes…

Review: Then There Was You by Miranda Liasson

One response to “Spotlight: A Light in the Dark by Becky Doughty”