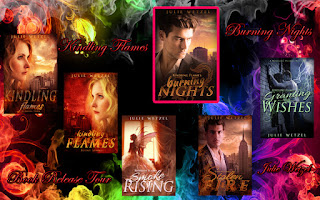 Crimson Tree Publishing is proud to present Burning Nights, the sixth book in The Ancient Fire Series by Julie Wetzel.

After a wedding filled with werewolves, fay, and vampires, Vicky is looking forwards to a nice, quiet honeymoon away from the chaos of Darien’s daily life. But nothing is ever simple with an Ancient Vampire around.

When the Vampire Council of Hawaii finds out Darien and his new bride are coming, they are determined to see that Darien is honored properly. But vampire etiquette isn’t for the faint of heart.

The nights could burn when lines are drawn… and Darien finds himself in a turf war he never intended to start.

“No,” Darien said, picking up the phone and punching the number for the front desk. “But I’m not sending her back to be murdered.” When the front desk answered, he turned his attention away from Shuri and had the clerk register him a second room in the hotel. When it was done, he hung up and looked back up at the woman waiting for him. “She can wait here until I’ve gotten this sorted.”

As if on cue, Vicky and Nalani came out of the bedroom. Both of the women had gotten properly dressed.

He looked over the shirt and shorts Vicky had put the girl in. “Much better,” he said as he came over and stood next to Vicky. “Thank you.” He gave her a quick hug and kissed her on the temple.

“You’re welcome,” Vicky said, leaning into his side.

“I’ll be back soon,” he promised, giving her one last squeeze before letting her go. He turned his attention to Shuri and Nalani. “Let’s go,” he said, leading the way towards the door.

“Darien,” Vicky called before he could get to the door.

He stopped and looked back at her.

“You’re forgetting your keys again,” she said with a smile.

He let out a small laugh and grinned. “As always,” he said, shaking his head at his own forgetfulness. “Excuse me for a moment.” Heading into the bedroom, he rounded up his suite key, wallet, and phone. As he headed back out, he glanced at Vicky, now standing with the other women. “Call me if you need me.”

“Now, let’s go,” he called to the other two women.

They followed him as he headed to the door and held it open for them. “Did Mano bring you?”

“Good,” Darien said as he pulled the door shut behind them and pointed the two women towards the elevator. “Then once we get Nalani settled, he can take us back to the Council.”

“But it’s daylight there, my lord,” She said worried. “You’ll burn.”

Darien punched the button for the elevator and stepped back to wait for it. “That’s my problem to worry about. Not yours.”

Shuri raised a curious eyebrow at him, but didn’t say anything.

When the elevator arrived, Darien ushered them all in and sent it to the lobby. He leaned against the wall with his arms crossed over his chest and worried about how he was going to solve this. If he didn’t choose his path carefully, he was going to end up in a fight that he wasn’t sure he would win.

Fresh from college and with no real work experience, Victoria Westernly considers herself lucky to land the coveted position of personal assistant to Darien Ritter, the CEO and owner of a multibillion-dollar company. His busy schedule and eccentric ways are enough to keep her on her toes. But, all is not what it seems when she discovers the handsome man employing her just happens to be the most powerful vampire in the area.

When Vicky becomes the target of a serial arsonist plaguing the city, Darien calls on the supernatural community to help. Pulling the creatures of the night together to cooperate on any project is troublesome at the best of times. The fact that the one responsible for the city’s woes is a being of fire and magic leads the reluctant groups to a truce that makes Vicky start to think that her job might be a bit more than one normal human can handle.

Is there such a thing as a normal life when you live with an ancient vampire and a temperamental hellhound?

Victoria Westernly was just starting to think so. With Samhain just around the corner and the promise of a Halloween Ball, her life was looking good. Even the addition of a new master vampire couldn’t bring her down.

When Victoria and Darien become the victims of a series of unfortunate accidents, they know something’s up. Where there’s smoke, there’s fire. But, the question is… who is burning what?

Night. A time of quiet, of peace, of rest, and now, a time of terror.

With an uncontrolled vampire plaguing the city, the Vampire Council of Brenton once again calls on Darien Ritter for help.
Overwhelmed with the issues of a new menagerie and plans for his wedding, Darien still manages to step up and answer the call. The only problem is, he suddenly finds himself a little too… human.

Leprechauns don't exist. Or that's what Cathren has always believed, but a chance encounter changes everything. When she saves a handsome stranger from a nasty electrical shock, not only does he claim to be one, but he also insists on granting her wishes. Now she must decide— is he insane, or a magical creature of lore? Unsure which is true, she grabs at the first three wishes she can think of: true love, happiness, and waffles. A tall order for most men, but not for Patrick Brogan. With a little persistence and just a touch of magic, anything is possible.

Originally from Ohio, Julie always dreamed of a job in science. Either shooting for the stars or delving into the mysteries of volcanoes. But, life never leads where you expect. In 2007, she moved to Mississippi to be with her significant other.

Now a mother of a hyperactive red headed boy, what time she’s not chasing down dirty socks and unsticking toys from the ceiling is spent crafting worlds readers can get lost it. Julie is a self-proclaimed bibliophile and lover of big words. She likes hiking, frogs, interesting earrings, and a plethora of other fun things.

TTT #154 – My Favorite YA Fantasy Couples

Waiting on Wednesday #32 – The Mirror King by Jodi Meadows

Spotlight: For the Heart of Dragons by Julie Wetzel

One response to “Release Blitz: Burning Nights by Julie Wetzel”