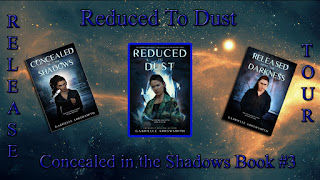 Clean Teen Publishing is excited to announce the release of Reduced to Dust, the final book in the Concealed in the Shadows series by Gabrielle Arrowsmith.

The commander devastated the town of refugees and, to wound Sydney more deeply, seized her family. Crewe promised to help her rescue them, but paralyzing grief over his own loss has made him unreachable. With the other seeksmen feeling equally defeated-and the traitor still among them-Sydney is more alone in this fight than ever, but she will not give up. With relentless determination, she vows to do everything in her power to get her loved ones back. Sydney's chances for success are threatened as plans backfire and unforeseen obstacles arise. When her true tie to the commander is revealed, she loses the trust of the few allies she has left. The situation grows even graver when a terrible epidemic advances, and the responsibility to decide who will have a shot at surviving is placed in her uncertain hands. The suffering has to end, and only Sydney has the unique knowledge and connections to bring down the cruel leaders of the oppressive system. The time has come for the battle of her life-one that will claim many. Even if she survives, will her heart endure the choices she will be forced to make?

Catch up on Concealed in Darkness Now!

Concealed in the Shadows by Gabrielle Arrowsmith
Series: ,
Published by Clean Teen Publishing on 2012-05-17
Length: 346 pages

Sydney Harter has long awaited September 12th, 2033—her eighteenth birthday. She can finally apply for guardianship of her sister, who is her only family and entire world. She hopes they will be lawfully reunited, but is prepared to defy authority and risk everything to escape the captivity of Miles County so that they can be together.

Escaping will be difficult and dangerous. Citizens are bound to their county by sophisticated chip implants that deliver shocks to those who dare to cross the electric barrier. Sydney is very clever, but her trickery is limited against the all-seeing eyes of technology. Even if they were to survive the escape, disappearing into the forgotten forests and towns of the past seems an impossible task.

What Sydney doesn't know is that she is the particular interest of two opposing forces. With deceit, fear, and warfare surrounding her—can she trust the party that aims to help with her fight against the other? Can she open her heart to receive and return unexpected love? When her sister’s life becomes jeopardized, Sydney will have to weigh a new love against the only enduring love she has known. The cost could be deadly…

How will she choose?


Free on All Platforms:

Released from the Darkness by Gabrielle Arrowsmith
Series: Concealed in the Darkness,
Published by Clean Teen Publishing on 2014-02-28
Length: 343 pages

Two young seeksmen are dead, and Sydney blames herself. The only way to get her sister back from the county's clutches, while also preventing more death, was to offer her own life in exchange for Evvie's freedom.

She expected a dreadful end, but nothing like the prison in which she wakes. Agonizing county life is redefined in Neo-Necropolis, new city of the dead, which lies beneath the earth. Worse than being allegedly deceased, is the false identity Sydney is forced to assume where Evvie, Sheridan's captain, and Crewe never existed.

Sydney alone knows the magnitude of the county's evildoings inside, outside, and now below. At only eighteen, the responsibility to defend freedom falls solely on her tried and tested shoulders—a burden that requires desperate action when a catastrophic revelation upends the world as she knew it.

The people Sydney cares for are more vulnerable than ever. Though she's buried underground and monitored by county agents, she must escape this new captivity. Maybe it's time to fight fire with fire. Sydney has proven her courage in facing their weapons, but can she trigger her own? 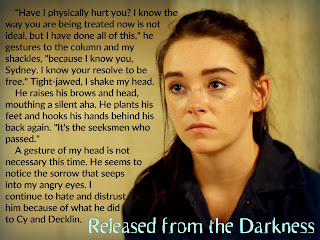 Gabrielle Arrowsmith grew up in the small town of Ham Lake, MN enjoying school, soccer, reading, playing piano, and endless adventures with her brother and cousins. As a young child, Gabrielle’s desire to write led her to fill many diaries and notebooks with her thoughts, poems, stories, and scripts.

Gabrielle recalls first believing in the worth of her writing in high school, where her advanced language and literature coursework both challenged and celebrated her craft. She aimed for perfection in her work, yet made time for her other courses, soccer, track, National Honor Society, and theater.

From 2006-2009, Gabrielle attended St. Scholastica in Duluth, MN where she earned a degree in Elementary Education. She played collegiate soccer for the Saints, held work-study positions, acted in theater productions, and volunteered often.

Gabrielle is currently teaching and pursuing her passion for storytelling through writing and acting. She enjoys reading, watching movies, listening to and playing music, playing and coaching soccer, being outdoors, and spending time with her family and friends.

Waiting on Wednesday #88 – Defy the Stars by Claudia Gray