Known as Bloody Vik Brandee, Viktor Brandewyne had a reputation as a bloodthirsty pirate. The world would soon learn just how bloodthirsty he had become. Thanks to the vengeful curse of a powerful witch, he had become a vampire. However, since he was cursed, rather than bitten, he was not vulnerable to daylight or holy items. As curses went, he didn't think it was all that bad, until Mother Celie, his foster mother and a witch in her own right, informed him that the curse would eventually destroy him. Now he finds himself in a race against time to find the seven Sisters of Power and gain some of their magic in order to survive the curse. He is aided in his quest by Hezekiah Grimm, his first mate; Belladonna, a siren and sea witch; and Lazarus, a creature that is sometimes a cat and sometimes a raven.

May 2018 Update: As of this time the author has pulled all books in the Waves of Darkness series from all platforms while she searches for a new agent/publisher. Buy links will be added when books return to market.

Blood Curse by Tamara A. Lowery is the first book in her series Waves of Darkness and follows the story of Bloody Vik Brandee, a pirate and a vampire two of  my favorite types of characters 😉 Viktor Brandewyne has always been a ruthless boy and grows into an even worse man. He comes by his nickname well and he cares for no one except possible the woman he calls Old Mother. After killing a young man in a bar, a witch curses him:

“I curse you, white man. You hunger for gold? No more. What you spilled so freely, without a thought, now will become more precious than any treasure. You will pass by an entire mountain of gold for a single drop. Food will not satisfy your hunger. Wine will not quench your thirst. What you drink now is redder than any wine. You will forego a bountiful feast for just a taste of blood. You spill blood, now you live for it. You will take it from even those you do not wish to, because without it, you will die.” ~Mamaan Juma

Alright, let’s be honest for a second. I was hesitant to read this book. But after about 15 pages and the curse that Mamaan Juma places on the main character I was hooked. This story is an interesting mix of historical fiction (as it is set in the 1700s and revolves around the life of a pirate in the Caribbean), romance, suspense, and fantasy. I truly had a hard time sitting it down and finished it in just under three days. It’s a unique twist on the typical pirate adventure, adding in the fantastical elements of vampires, witches, mermaids and sirens.

Vik, the main character, is a cunning and ruthless pirate. There’s times while reading I wasn’t sure if I liked him or not. To be honest, I don’t ever want to be on this man’s bad side. He kills because he enjoys it and finds unique ways to torture those who cross him. When he becomes cursed, at first he despairs. Then he sees the advantages it gives him, like inhuman speed and strength, the ability to see at night, and heightened senses. Also it helps that when he is described he doesn’t look like the grungy pirates you might think him to be. Oh no! While reading I kept picturing: 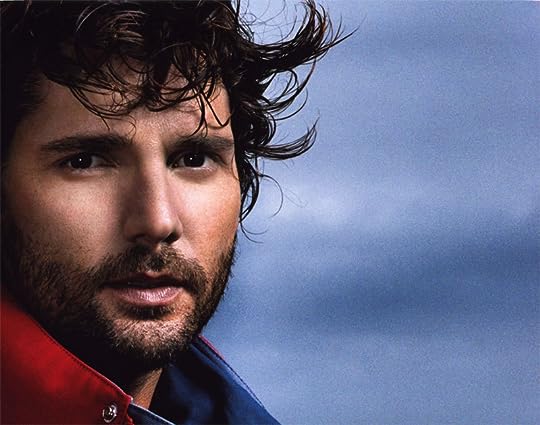 So yeah, not what I usually picture when thinking about a man who lives on a ship day in and day out, but this is exactly what I pictured.

Then there’s Belladonna, a siren and his guide in finding the witches. She’s a truly terrifying creature. In water, she has the fin of a shark and rows of shark teeth. On land, she’s your above average beauty. She’s also deceitful and full of tricks. She’s a great antagonist for Vik, keeping him on guard, but she could also be a great love interest as the series progresses. I guess time and a little more reading will tell 😉 The rest of Vik’s crew is exactly what you’d expect of pirates. They bring a bit of comic relief to the story, and they are usually the brunt of Vik’s anger and blood lust.

The plot of this story is really great and it hooked me right at the beginning. It doesn’t stray from the main topic of the series which is breaking his curse. The book is devoted to finding the first witch and completing her task so that he may collect some of her power. Because it is the first book, there is a bit of learning on Vik’s part as he adjusts to being a vampire and learning that not all the myths he heard are just myths but reality. His relationship with Belladonna brings quite a bit of sexual tension to the story as they both test the other’s patience and temper.

Overall, I found the story of vampire pirate Vik Brandee a refreshing and terrifying tale! I really cannot wait to start in on book two and find out what will happen to the pirate and his crew as they continue their search for the witches. A plus, even though the book is a part of a series, it doesn’t end in a cliffhanger. At least not one that leaves you reeling 🙂 FYI though if you don’t care for violence in books, then I caution you to think before reading. I mean it is a book about pirates and a vampire after all! Also there is some strong language and some sexual innuendos so I really recommend that this book be for adults. If you enjoy historical fiction, fantasy, and a bit of romance, I highly recommend you check this book out. It won’t disappoint!

About Tamara A. Lowery

Tamara Lowery is a former maid and current auto industry worker. She is a graduate of Soddy-Daisy High School and Chattanooga State, where she majored in Journalism. She is a new author. She currently lives in Tennessee with her husband and the Rottentots, her cats.

Review: A Court of Thorns and Roses by Sarah J. Maas

Review: My Soul to Keep by Sean Hayden

Review: A Place Beyond by Laura Howard

Review: Through Glass: The Blue by Rebecca Ethington

One response to “Review: Blood Curse by Tamara A. Lowry”